The Boys of Syracuse, Kansas is a series of
standalone novels featuring characters
connected to the town of Syracuse, Kansas.
Most notably a family of cattle ranchers whose
ties to the land go back to the 1880s. Good,
old-fashioned cowboys. No anti-heroes and no
graphic sex, though there is brief graphic
violence and intense, suspenseful situations. 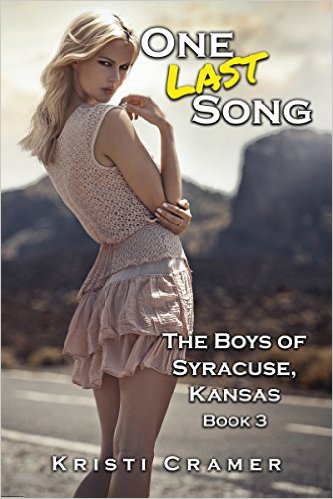 One Last Song
(The Boys of Syracuse, Kansas Book 3)

In a bold operation that leaves the tiny town of Syracuse reeling, Kylie and Jax are kidnapped. Getting nabbed for human trafficking would be bad enough, but their captors have an additional agenda.

Singing is her ticket out.
Kylie Thomas works at the diner, but she dreams of becoming a star. She sings from her heart, capturing the attention of everyone in town. She knows someday she’ll perform in concert halls around the world.

Being her best friend isn’t enough.
Jax Belamy has loved Kylie since he was fifteen, but she won't take him seriously. He's had to settle for being a friend, taking advantage of any opportunity she gives him to get close…even if it means stepping out of his comfort zone.

Will their song end before it begins?
When a talent scout approaches them after a karaoke contest, Kylie hopes this will be her big break. Something doesn't feel right to Jax, but he ignores his instincts to please his friend. What happens in the next twenty-four hours is not on any playlist. 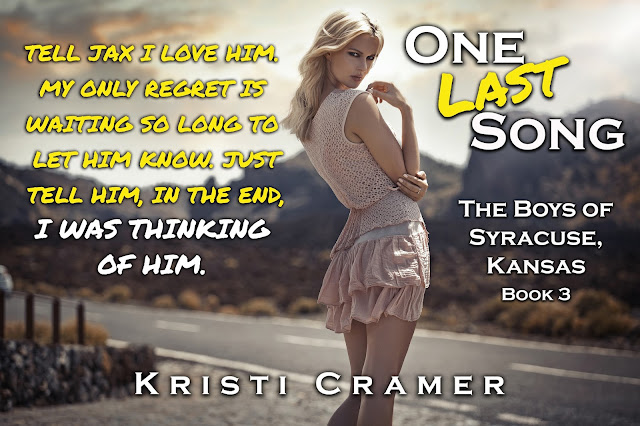 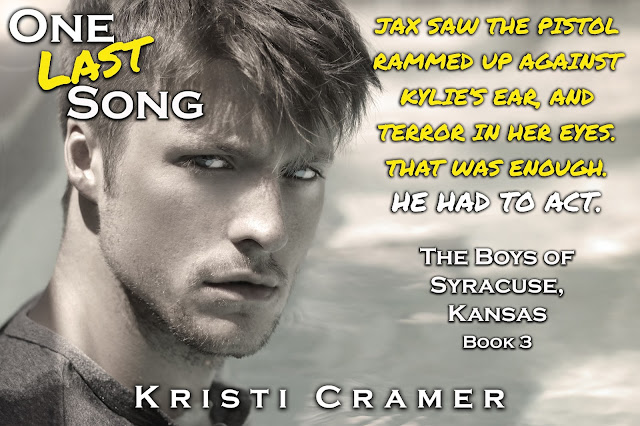 Last Shot at Justice
(The Boys of Syracuse,


Denver Detective Mitzi Reardon doesn’t know
what she did to anger her boss, but he is
gunning for her. Literally. Now a prostitute is
dead, and she is the prime suspect with the law
hot on her heels. With nowhere to run and no
one to trust, Mitzi’s only hope lies in the
hands of a sexy stranger.

Blue Thomas is new in town. Denver’s
bright lights and big city bustle are 250 miles
and a world away from his family’s cattle ranch
in Kansas, and he is out of his element. He came
to find work and save the ranch from foreclosure,
but on a rainy night a desperate woman finds
him. Back home, he would never let anyone—
especially a woman—face danger alone. Without
fully understanding what he is in for, Blue
pledges his help, whether she wants it or not.

As a trap closes around them, Mitzi must
abandon her usual strategy of careful planning
and situation management, instead relying on
quick thinking and a bold, head-on approach that
may just get her—and Blue—killed. Before the
last bullet flies, Blue will find out just how far he
is willing to go to live up to his old-school ideals
of gallant chivalry.

This book was previously released as Blinding
Justice. There were no plot changes. If you read
Blinding Justice you do not need to purchase this
title. The Boys of Syracuse, Kansas, is a series
of standalone novels featuring characters
connected to the town of Syracuse, Kansas. 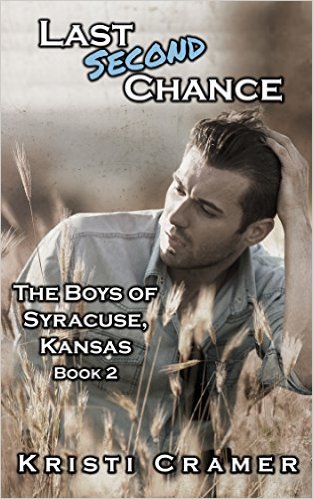 An ex-con's search for a new start leads to a
chance at a life and a love he never expected.
But the life he left behind won't stay quietly in his past.

Reach for a Better Future
Tim Reardon made a real mess of his life, and
spent the last five years paying for it in a federal
penitentiary. Thanks to his sister, he has a
chance to work on a ranch in a small town where
no one knows his history and he can start over
Even his heart likes his prospects in Syracuse, Kansas.

Release the Past
All Janie Thomas ever wanted was to live a
simple life as a veterinarian, taking care of her
daughter and the pets and livestock in
Syracuse. She had enough drama after giving
birth at seventeen. Kylie's father, Cody Buford
couldn't be bothered with a kid and ran off to the
big city, leaving her to raise their child alone.
Janie hasn't risked her heart since.

Brace for a Reckoning
Now Cody is back, asking for Janie's
forgiveness, but is she ready to give it? On top
of that, the brooding, sexy new ranch hand out
at the Lazy J is bringing up emotions she
thought she had put to rest long ago. Tim thinks
he might just be able to leave his past behind
him and put his life together. There's just one
problem. His past is hell-bent on finding him. 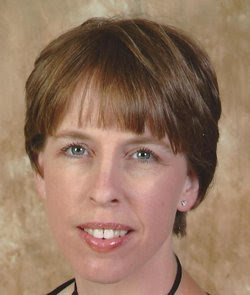 Kristi doesn't know how she got old enough to say she's been writing for three and a half decades. She has always considered herself a writer, although she has worn a lot of hats in the course of her work history--from cashier at the movies and car wash, all the way to insurance underwriter. After leaving Portland, Oregon for life in a smaller town, she tried on a few more hats before she met her husband, started a trucking company, and ultimately left the office to drive over the road with him. On the road, she rediscovered her love for writing, and knuckled down to complete her first self published novel, a romantic suspense: Knight Before Dawn.