~*COVER REVEAL*~ Enemy of my Enemy by Ivy Lucas 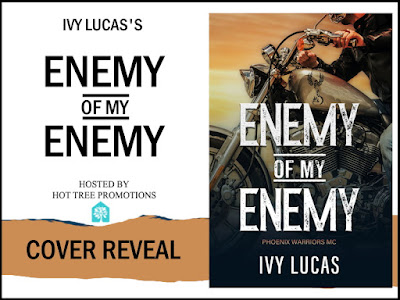 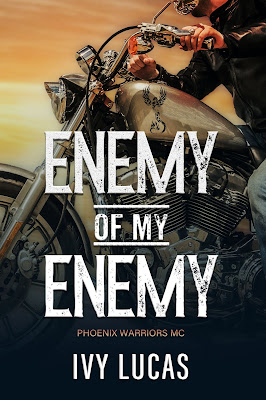 Secrets, double lives, and a hidden agenda collide with hope, humor, and adventure as the passion between two star-crossed lovers ignites.

Hawk is a biker driven by a singular purpose, fueled by an all-consuming need. A need for vengeance. ​He’s spent the last four years planning his retaliation, and it’s time to strike; it’s time to annihilate his enemy.

Zoe has one rule in life: no regrets. She lives on the edge and is willing to risk everything for her crusade. A crusade for justice. She’s spent the last four years on a crime spree of epic proportions, all for the good of the cause. All to destroy her enemy.

Escalating war consumes the underworld of Broadwater Bay, an underworld where Hawk and Zoe live on opposite sides, behind enemy lines. ​Will they be able to trust each other long enough to discover that they have the same enemy?

Because the enemy of my enemy is my friend. Or is it lover? Or is it another enemy? 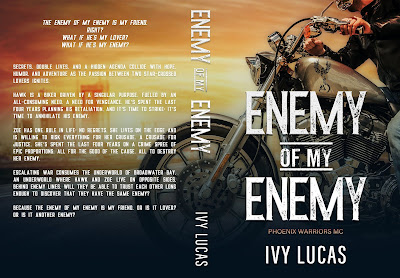 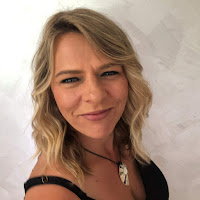 Ivy Lucas writes romantic suspense novels that feature a healthy dash of humor, kickass heroines, and hot alpha men. She is a dreamer, professional reality-escape-artist, and has a serious coffee addiction.

Ivy has always been obsessed with reading, and when she didn’t have her face buried in a book, which was often because she devoured them, she would make up her own stories to fill the void. Ivy’s imagination is a crazy and dangerous place to be, even for her independent, sassy female characters. It’s also the best place to meet sexy men who have that panty-dropping, anti-hero thing going on.

A woman of the world, Ivy was born in Holland, grew up in New Zealand, and spent a year living in Europe when she was a teenager. She traveled to Australia not long after finishing school for a one-year working holiday and never left. She now lives in sunny Queensland with her soul mate, their two kids, and a fluffy white cat.

Over the years Ivy has been a jack of all trades and master of none - until the day she decided to write down one of those stories she had floating around in her head. That was when she realized her passion for books was about more than just reading them. She had stories to tell and they were demanding to be told.