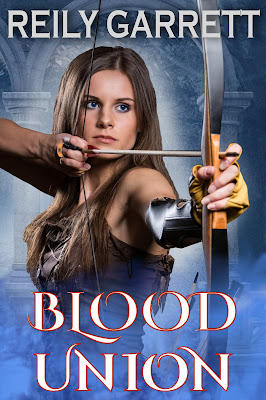 The only good vampire is a dead one.
Crystine employs every witchy spell and feminine deception in her arsenal to keep her ward safe. Failure would signify mankind’s downfall at the hands of demons.
Over the centuries, she’s honed her skills to protect the innocent, but evil forces have united for a common cause.
When the odds stack against her, she makes a deal with the very creature she’s spent her life hunting, a vampire who professes to be her destined mate.
It’s easier to kill the monsters who slaughter innocents for sadistic pleasure than to face one who claims to support mankind. Now, she must set aside her hatred while enduring his persistent need for close proximity.
He is everything she’s never encountered, with seductive skills perfected over many centuries and with many women. Her mind targets him as the enemy, but her senses crave his touch.
A bargain is struck. Blood is shared. Until the threat to mankind has ended, he is safe from her blades, but nothing can protect her heart from his carnal sexuality. She has no defense.

Chapter One Gryffen
Gryffen considered the many ways he could punish Crystine as he skimmed the treetops in the early morning light. His thoughts circled the ones she’d enjoy—if he could prevent her from killing him in the interim. The greatest risk arose from her five centuries’ worth of experience with spell casting. She’d proven herself skilled as well as clever, much to his dismay. He’d met his match.
Gray bled to orange, violet, and blue as the sun’s rays crept over the earth while he considered her motive for fleeing the sanctuary of his home.
It wasn’t the man which caused Crystine to sneak out like a thief in the night; it was her own reaction to him that challenged her re-examination of everything she thought she knew about vampires.
She’d spent centuries training and killing his kind and couldn’t switch gears long enough to sort her feelings. It didn’t matter they’d fought demons side by side in order to destroy an artifact destined to end humanity. The enemy of her enemy was not her friend.
Like prejudices burdened his thoughts. Vampires and witches just didn’t mingle, much less mate.
Another fiery pain sliced through his arm, the result of his witch’s newest wound. Whatever sensation she experienced was replicated in his body, a wretched reminder of them sharing blood.
Their connection’s sudden emergence indicated her lack of strength in shielding her aura. His fist clenched around the hilt of his sword in preparation to protect his mate.
Through their link, he sensed her desperation, along with overwhelming regret. She’d wanted a fresh start, away from vampires, demons, and the evil encroaching on mankind. Instead, she’d stumbled into more of the same darkness that had comprised her life.
Flying low over the desolate forest concentrated his vampire senses until the dull thud of steel striking demonic hide altered his southern course.
Doubt overshadowed his confidence in her ability to survive with each mile passed despite her wielding Cliffin blades the way an expert chef handled knives, an extension of the hands.
A flash of insight accompanied by an inhuman growl altered his path over the lush canopy. Veering slightly west, he witnessed glimpses of her struggle through budding leaves and swaying pine needles, her steel catching the sun’s first beams.
She faced three creatures, one beginning to slip her witchy hold. If not for the strength derived from their blood exchange the prior night, she’d be dead.
The intensity of last night’s encounter had left them both exhausted to the extent he hadn’t believed she’d run.
He’d recoiled at her self-disgust when the last shudder of her orgasm had subsided. Neither believed fate would pull natural enemies together. If not for his personal warding spell, she might have ended their problematic relationship with her sword.
He felt a kinship with the male praying mantis.
Waking from an unnatural sleep, he knew she’d fled to preserve her tattered self-respect. If not for the terror of what she now faced, he would’ve taken his time in stalking her, teasing her with his presence.
Another burst of speed shot him over the small clearing as the sun’s rays crept along the horizon. Crystine faced off against greater odds yet with equal determination.
She’d feel the specter of his aura before seeing him approach. Whether or not the demons she fought detected him depended on their level of power.
He circled behind them and descended while drawing his sword then hacking through the first creature’s neck using gravity and momentum. The speed of descent coupled with his strength detached its head, its look of shock in falling to the ground forming while black acid sprayed from its severed skull.
“Hi, hon. You miss me?”

Reily is a West Coast girl transplanted to the opposite shore. When she’s not working with her dogs, you can find her curled up with a book or writing her next story. Past employment as an ICU nurse, private investigator, and work in the military police has given her countless experiences in a host of different environments to add a real world feel to her fiction.
Over time, and several careers, many incidents have flavored the plots of her stories. Man’s cruelty and ingenuity for torment and torture is boundless, not contained by an infinite imagination. Witnessing the after-effects of a teenager mugged at knifepoint for a pair of tennis shoes, or an elderly woman stabbed repeatedly with a screwdriver for no apparent reason, left an indelible impression that will forever haunt her subconscious. In counterpoint, she has observed a woman stop her vehicle in severe, snowy weather to offer her own winter coat to a stranger, a teenager wearing a threadbare hoodie. Life’s diversities are endless.
Though her kids are her life, writing is Reily’s life after. The one enjoyed after the kids are in bed or after they’re in school and the house is quiet. This is the time she kicks back with laptop and lapdog to give her imagination free rein.
In reading, take pleasure in a mental pause as you root for your favorite hero/heroine and bask in their accomplishments, then share your opinions of them over a coffee with your best friend (even if he’s four-legged). Life is short. Cherish your time.