Even cursed blood can fall prey to love’s bite.

Stone Haven isn't Torr's kind of town. Small. Quaint. The kind of place where everyone knows your business.

Torr Derrickson intends to help his brother fulfill a lifetime dream of opening a bar and then quickly get out of dodge. Unfortunately, his antics— as a bit of a playboy and, more importantly, a vampire— have already caught the attention of some townspeople, much to his brother's dismay.

The English teacher is everything Torr is not. A small-town girl. A rule-follower. And a very much human. She's the last woman he wants in his life, and the only one that sets his blood on fire.

Charlotte know there's something different about her friend's brother, but she wasn't quite prepared for the secret he unveils. Worse, her attraction to the bay-boy vampire fills her thoughts distracting her from the redemption she desperately needs.

Forced together, the two opposites must decide between passion and reputation. Love and fear.

When his older brother used that tone, Torr Derrickson knew he should do one of two things. Listen patiently, preferably with a drink in hand, or walk away.

Regrettably, over the course of their long, long lives, he’d usually gravitated toward a third option: fight. He and Lawrence had butted heads about any number of things in any number of places—from where to live when they weren’t hunting Cheld to how they invested their vast wealth—and if he’d learned anything, it was that he couldn’t go up against Lawrence, who had, after all, been his clan chief centuries before, without one of them ending up bloody.

They were vampires, yes, but they were brothers first and foremost.

“Something tells me I’d like a refill first,” he told Lawrence, who pulled Torr’s empty glass toward him from across the mahogany bar.

Although his brother had not yet finished transforming the old bank he’d bought into the bar he planned to open, his liquor license had been granted, making it legal for him to serve alcohol, a fact their small group had been celebrating for the past few hours. They sat around the circular bar in the middle of the room. Lawrence stood behind it, as usual.

After refilling Torr’s Ardbeg, the only whiskey he’d drink if given the choice, Lawrence leaned against the bar, crossing his arms as if settling in for a long lecture.

Fantastic. At least he’d asked for the drink first.

“You said ‘we’ needed to talk,” he lifted an eyebrow, “so why do I have a feeling you’ll be doing most of the talking?”

“That’s what worries me.”

“You’ve been back for less than three weeks, and people are starting to tal—”

“You mean, they’ve already grown tired of discussing the apple festival? You would think all that fuss over the festival queen would have them—”

Perhaps. Still, he wasn’t wrong, and they both knew it. The people in Stone Haven had a tendency to gossip about the most trivial of matters, including the tie vote for their festival queen and the ensuing brouhaha it had caused. Imagine, four vampires currently resided in the tourist-laden Pennsylvania town where his brother had decided to settle, and the townsfolk worried about offending a poor little rich girl whose daddy had just donated enough money to remodel the visitor’s center.

The Derrickson siblings and Kenton Morley could each buy and sell the small-time businessman fifty times over.

But no one here knew it.

The townspeople realized the Derrickson and Morley families had money, of course. After all, they had purchased the only two mansions in the town, neither of which had been up for sale. But no one could possibly fathom how much wealth an individual could accumulate after hundreds of years of existence.

“Which you obviously think is a bad idea.”

Lawrence’s frown made him look older than thirty, the age he’d been when they were cursed to live as immortals. The aging process had stopped at twenty-eight for Torr, leaving him perpetually the younger brother.

“I think it would be a fine idea if you weren’t making your string of bedmates so obvious.”
Torr took a sip of his whiskey and tried not to smile. It would only further infuriate his brother, and he really didn’t want to fight with him today, especially not in front of Lawrence’s girlfriend, Toni, whom he quite liked.

“If you’re asking me to be more discreet—”

Lawrence scoffed. “It shouldn’t be difficult given the way you’ve been flaunting your exploits around town.”

When someone tousled his hair from behind, Torr placed his drink on the bar so quickly the motion would have given most humans pause. Luckily, Toni, the only non-vampire present, already knew their secret.

Reaching back without looking, he snagged his sister’s hand.

“It’s almost too easy to get to you,” she said, sitting next to him. He’d tried for a menacing tone, but she seemed completely unrepentant.

She glanced from him to Lawrence. “What’s wrong?”

Torr shrugged. “Nothing at all.” From his perspective, it was true.

“Other than the fact that we’re preparing to open a business in a town too small to tolerate Torr’s antics,” Lawrence said.

Refusing to make eye contact with his sister, Torr concentrated on the liquid gold in his glass. But he could feel her piercing green eyes, the same shade as his own, on him anyway. Laria had always been able to get to him in a way Lawrence could not. She was his elder too, although only by a year, and he felt a combination of admiration and protectiveness for her. He’d do anything to insulate her from wicked men.

“Now what have you done?”

Hating the censure in her voice, he ignored the question.

“I’ve done nothing an uninhibited, virile—”

“What has he done?” she asked Lawrence instead, her tone dangerous.

“The mayor stopped me earlier today in The Witch’s Brew—”

“A rather droll name for a coffee shop if you ask me,” Torr offered, darting a glance at his siblings, both of whom ignored him. They were conversing with each other now, about him, no less.

“Apparently, there was some commotion at the inn the other night—”

Ah, so that’s what had Lawrence all worked up.

“About that,” he interrupted. “I don’t make a habit of attending bachelorette parties, but—”

He stopped when Lawrence shifted his gaze to the other end of the bar, where Toni sat with her best friend and . . . him. The bastard was grinning at his brother as if the two of them shared a private joke.

For centuries the man had been their enemy, and now he and Lawrence were acting like best buds.
Lawrence may have forgiven, if not forgotten, Morley’s former crusade against the Cheld, which he’d forsaken for Alessandra, but Torr certainly hadn’t. As far as he was concerned, the other vampire was still their enemy.

He wasn’t about to pretend otherwise.

“It won’t happen again,” he ground out, ending the conversation. “If you want me to leave—”

“He doesn’t want you to leave,” his sister, the peacemaker, cut in. “Just try to remember this is Lawrence’s town, and he means to stay here.”

“For now,” he muttered under his breath, earning himself a couple of dark looks from Lawrence and Laria. “Fine. I hear you. Best behavior.”

He grinned, wishing—not for the first time—his charm had more of an effect on his siblings. They knew him too well to fall for it.

“I appreciate it,” Lawrence said. “Now give me your glass.”

Taking yet another refill from Lawrence, he lifted his glass in the air. “That may be asking a wee bit too much, lassie,” he said, knowing his sister had a soft spot for the accent of their homeland, which they’d dropped over the years. “To Lawrence.”

Joining him in a toast, his siblings raised their own drinks, their differences momentarily forgotten as they celebrated Lawrence and Toni’s forthcoming business venture.

His brother deserved to be happy, so he would try to behave.

For tonight, at least. 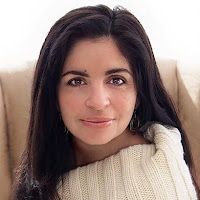 Cecelia Mecca is the author of steamy historical and paranormal romance.

Every heroine, from Lady Sara in the Border Series to Alessandra Fiore in Bloodwite, is your best friend– the one who kicks ass and takes names. When these ladies meet alpha-males who try to take control, sparks fly until the very last page.

Cecelia writes the bestselling Border Series which takes readers to an admittedly romanticized time of knights and castles along the 13th century Anglo-Scottish border.

More recently, she's been dealing with the ultimate bad boys– sexy, wealthy and swoon-worthy vampires– a venture not for the faint of heart. Her debut paranormal romance series, Bloodwite, releases January 2019.

Our Highlander-loving, vampire-writing author can be found in Northeast, Pennsylvania, chai in hand, thinking up new ways to tame both medieval and paranormal playboys. She is firmly House Stark and Gryffindor.