~*BLOG TOUR*~ Run With It by ML Nystrom 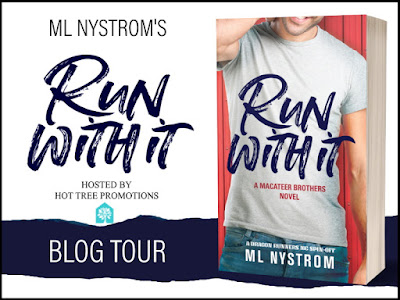 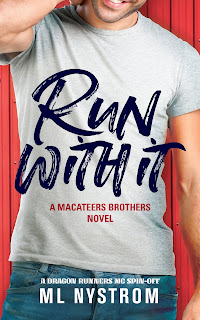 The struggle is real.  Beverly spends so much of her time juggling her four kids, a dead-beat ex, and two jobs that she never has time for herself or another man in her life.

Then Connor moves in next door.

Connor is healing from a hard break from his family and is working to find his own identity.  He has no interest in joining another one.

Then he meets his neighbor.

Two people building new lives. Two people with no time or energy for love. Bev and Connor are determined to stick to their plans, but life has other ideas—now they just have to run with it.

"Run With It" is a Dragon Runners motorcycle romance spin-off., featuring Connor from "Stud."

The man turned and looked at the wide front porch where my kids were holding the welcome wagon. Just my luck to have them squabbling loudly when our new neighbor was moving in.
As we moved to the driveway, I noticed he was a large man, broad and solid. I wore mom jeans with elastic at the waist, sneakers, and an oversized hoodie with a picture of our school mascot peeling from age. My hair was scraped back in its usual ponytail, and any scrap of makeup I had on from earlier today had worn off hours ago.
Please don’t be handsome too. Please don’t be handsome too, I prayed. It would be more of my luck to have a real hottie move in when I looked every bit of my age.
“I blocked you in, didn’t I?” His voice was deep and slightly accented with something European. Irish maybe? Ya ain’t from around here, are ya? floated through my mind in a deep Southern twang.
“Um… yeah. We were just leaving for the football game, and you’re makin’ us late,” Mattie told him. Not a shy bone in that kid’s body.
“Mattie, don’t be rude.”
The man didn’t seem to mind my son’s bold statement. “Sorry about that, lad. I didn’t realize you were leaving. Get on in your car there, and I’ll move my truck for you, yeah?”
As I got closer, his dark hair came into view. The lower half of his face sported a short beard of the same color. He wasn’t classically handsome, but he certainly wasn’t bad to look at either. His bright green eyes had small lines that radiated from them, making him around my age. He was definitely rugged, and his tanned skin made me think he worked outdoors a lot.
“Oy! Owen! Back out! These people have somewhere to be!” The man’s powerful yell made me jump.
The moving van jerked once as it reversed and backed into the street.
The man turned back to us. “I’ll park my truck on the street tonight, and we’ll figure out how to make it work later. Fair?”
“That’s very fair, Mister…?” I hedged.
“MacAteer. The name’s Connor MacAteer.” He held out a giant paw. Lord, the man was a bear! 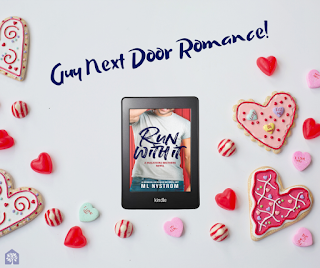 I've had stories in my head since I was a child.  All sorts of stories of fantasy, romance, mystery and anything else that captured my interest.  I'm a voracious reader, and have spent many hours in my life devouring books, therefore it's only fitting I should write a few myself!

I've spent most of my life as a performing musician and band instrument repair technician, but that doesn't mean I'm pigeon-holed into one mold.  I've been a university professor, belly dancer, craftsperson, soap maker, singer, rock band artist, jewelry maker, lifeguard, swim coach, and whatever else I feel like exploring.  As one of my students said to me once, "Life's too short to ignore the opportunities."   I have no intention of ever stopping so welcome to my story world.  I hope you enjoy it!