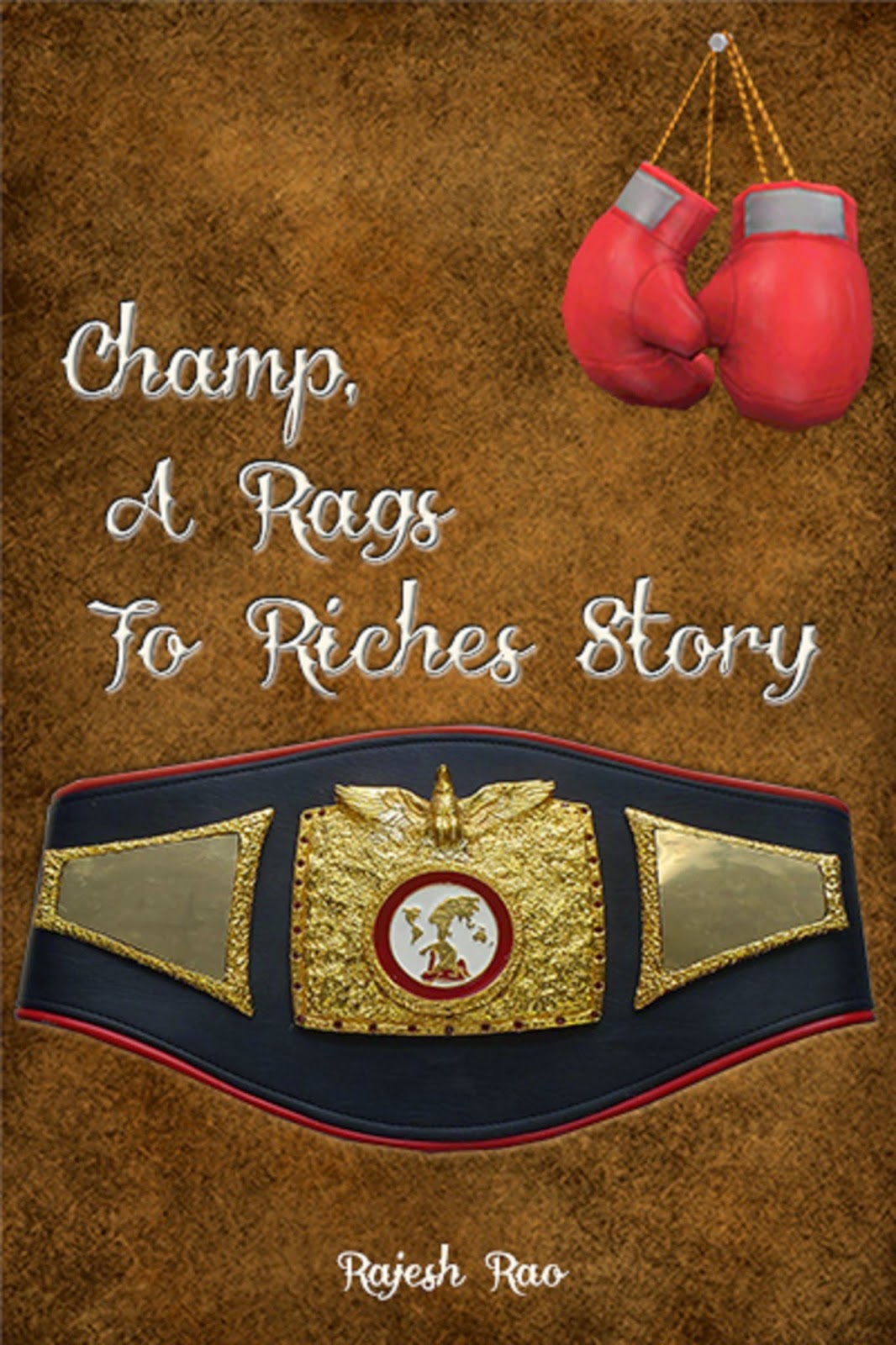 Champ- A Rags to Riches story is the saga of a poor boy, who rises from the depths of poverty in the largest slum in Asia to reach dizzying heights in the big bad sport of Professional Boxing. It also narrates his struggles with various factors in life, which includes his environment and the temptations that lay therein; his losses at important junctures in his life and also the apathy of a corrupt system which honors not talent but one’s  influence. It also tells you of the fact that whatever your start maybe in life, if you have the right company, you can be on the right path in life.

And given the right guidance, even slum-dogs can be champions and attain a lot in life.

The different opponents that he meets in the ring, both in the amateur career as well as professional teach us a bit about how they shaped themselves. The differences as well as the similarities that divides people into categories, and at the same time cuts across borders and inhibitions. It also shows us that love can be found in unconventional places.

Will he able to break the shackles of a life, which he was thrust into with a ball and chain? Will he be successful in catching up with all of his past demons? Or will he have to just go with the flow and accept his destiny just like the rest of his contemporaries had done?

Here is a novel that is well paced and at most times an edge of the seat story with some unexpected twists and turns.

Dubash was not really in the mood for work that day. And uncharacteristic of him, he hit the bar right in the morning. Downing a couple of Johnnie Walkers – on the rocks – he saw that many of the servants had not turned up. Later it dawned on him that many of them were on leave since it was Diwali – the festival of lights. He just resigned to the fact that it was yet another festival without his beloved by his side. Just then, he heard the opening of the front door and Ramu, the oldest of the staff and as dedicated a person as Anandi was heard happily chatting with someone who just entered. On looking out, he saw that Anandi was back. She was fit as a fiddle. Wearing a blue sari and an unusual style of sensuously fitted blouse that had a low cut that exposed the cleavage of her full breasts just enough to make a man weak in his knees. Maybe Angelica had passed it on to her.

What surprised Dubash was the fact that she had traveled past the shanty colony and the walk after that without a hitch. Even the normal hoodlums and other loose characters had failed to notice this exquisite sculpture. Of course, Ramakant would be too drunk to notice it or maybe he always eyed her with a lustful gaze. So, he wouldn’t notice the difference. In fact, the reason that nobody had noticed the features that Dubash was going over himself admiring was that she had covered herself with a shawl, which she had apparently folded and kept in the locker that was provided to the servants.

Now, call it fate or deliberate design that normally it was Ramu who would come to Dubash’s room and enquire what would the morning breakfast be. However, it was Anandi who walked to the room, knocked and entered. Dubash was spellbound and could just mumble “half fried on whole wheat”.

Normally, when young minds are exposed to the game of boxing, or for that matter any contact sport, which in turn is glorified by Hollywood and Bollywood, they tend to follow the movies blindly and focus on just the glam of the sport without taking into consideration the grit and grime that one has to pass through to reach that ultimate goal of being put on a pedestal.

A journey of a thousand miles starts with a single step…isn't that an age old saying? Well, although it is true in most cases, it is also true that every rule has an exception (or two). With due apologies to you the reader who opened this page to know more about the author and is being subjected to this philosophical blast. However, there is a reason for this kind of a start.

Rajesh Rao although had started out on many journeys, before the culmination of this novel, never taken most of the journeys he set on to the logical end. And though the journeys were left incomplete, the impressions that these experiences left on the person helped to shape a rather enigmatic personality that has left people bewildered. As is the case of the six blind men of Indostan and the elephant, which had a hidden meaning that not many students of that grade can fathom, many people (groups of friends, colleagues,etc) have branded him differently and in accordance to how they saw him, (rather than what he himself was) when they were involved with him.

Although boxing was his first passion, Rajesh has been involved in different sports like Kabbaddi, Basketball, Athletics and of course Cricket. These were mainly the journeys he just couldn’t complete. The sole reason being that although people saw the potential, his heart kept yearning for the smell of leather on the face.