~*BLOG TOUR*~ For Better, For Worse by Jane Isaac 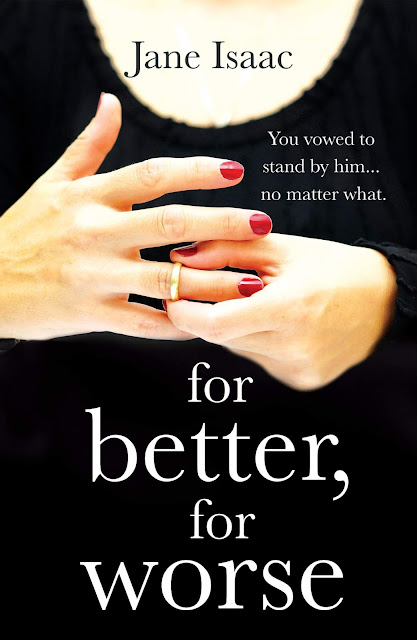 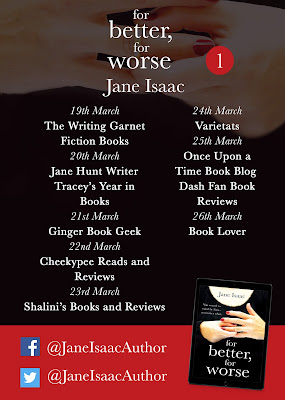 Blurb ↓
Stuart Ingram was once a respected local councillor...
The first time the police knocked on Gina's door, they arrested her husband.
The second time, they accused him of child abuse.
But he died a guilty man.
This time, the police are here for Gina – to tell her that her husband is dead. Murdered, just two weeks before his trial.
Gina always stood by her husband. Even when everyone else walked away. She believed the trial would clear his name. But now Stuart is dead.
And his wife is the suspect.
It's a race against time for DC Beth Chamberlain to uncover the truth – especially when a second man turns up dead.
Domestic noir meets police procedural in this pacy thriller from Jane Isaac, perfect for fans of Samantha Downing, Fiona Barton and K.L. Slater. Previously published as Presumed Guilty. 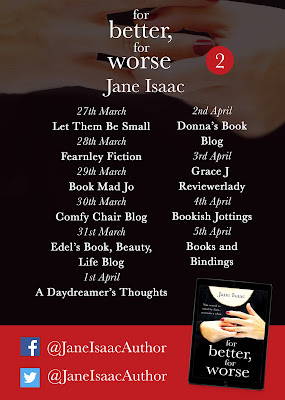 EXTRACT ↓
A kaleidoscope of blazing lights greeted them at the roundabout that marked the intersection between Rothwell’s Bridge Street and High Street. Beth tugged up her hood, climbed out of the car and approached the four by four marked with bold police livery blocking the road. The earlier downpour had abated, leaving a slow unrelenting drizzle in its wake and thick globules dripped off the trees and streetlamps as they passed.
A uniformed officer she didn’t recognise stood beside the police vehicle, blowing into his hands. He was clearly positioned to guard the scene from the end of the road and divert any incoming traffic through the side streets, although there was little traffic passing through that evening. Beth and Nick flashed their badges. The officer exchanged pleasantries, cursed the weather and directed them to a figure, beyond the inner cordon.
Dick Ramsay, the incident response shift sergeant, looked up as they approached. ‘I’m glad you guys are here.’
‘What have we got?’ Nick asked as they stepped over a splatter of rice on the pavement.
‘Hit and run. Looks deliberate. The victim left the curry house across the road, seconds before, and crossed at the zebra crossing.’
‘How do we know it was deliberate?’ Beth asked. It wouldn’t have been the first case she’d attended where the driver wasn’t paying attention, hit a pedestrian and sped off in a panic.
‘The assistant at the takeaway saw it happen.’ He paused and nodded at a lit shopfront on the corner of the road opposite. ‘Apparently the crossing was clear when he stepped onto it. The car veered across onto the pavement on the opposite side of the road to catch him.’
Beth strained her eyes to see through the net curtain of the takeaway. The layout was plain: a counter for ordering, a red bench beside the window for customer seating. But it did have a clear view of the crossing through the glass door, especially for someone stood at the counter.
‘The witness said it knocked the victim twenty feet or so into the air,’ the sergeant continued. He moved off, motioning for them to follow, and halted beside a lump covered with a foil blanket on the ground, close to the centre of the market square. ‘This is where he landed. The informant called an ambulance before they called us, more in hope than expectation, I reckon. The paramedics pronounced him dead at the scene at 10.23 p.m.’
Beth checked back to the crossing, gauging the distance from the point of impact. It must have been at least fifteen yards.
‘The hypothermic blanket was the only thing I had in the boot to cover him with until the CSIs arrive,’ Ramsay continued. ‘At least it’ll save him from the weather and—’ he looked up ‘—the prying eyes.’
Several cars were dotted nearby. When there was no market operating, the square doubled up as the town centre car park. It was lined with cafes and shopfronts on two sides, all encased in darkness, and flanked by the Holy Trinity Church on another. Along the bottom sat a row of residential terraces. Beth followed Ramsay’s eyeline to a house in the middle of the terrace where the silhouette of a woman stood at an upstairs window, blatantly staring down at them.
Ramsay pulled back the blanket. Covering bodies risked contaminating potential evidence and was generally avoided. But, given the wet conditions, she doubted there would be much left for the CSIs at this scene. The body was twisted, contorted from the fall. An arm was thrust out at an awkward angle, a leg folded beneath him. She crouched down. One side of his face was pressed into the tarmac, the head misshapen and split open at the top. But the facial features, on this side at least, were fairly intact. She peered in closer. There was something familiar about him. ‘Do we know who he is?’ she asked.
‘We’ve been through his pockets. No wallet, ID, or car keys on him. It’s possible they dropped out of his clothes when he was thrown through the air.’
Author Bio ↓