Shame. It wounds us. It damages us.


Or, for the few poor souls out there like me...it defines us.
I'm the son of the devil himself—the most feared mob boss who ever lived.
I was cursed from the moment I took my first breath.
I hate him...and I never wanted to become him.
And I sure as hell never, ever, wanted anything of his.
Until her.
My name is Ricardo DeLuca. There are two things you need to know about me. The first—is that I'm in love with the girl who belongs to my father. The second—is that it turns out I am my father's son after all.
My name is Lou-Lou, and you probably think I'm a bitch.
You would be right—because I am.
You think you know all there is to know about me because of the man I belong to.
What you don't know—is my past, because I'll never tell you.
What you don't know is my shame.
Because if you did—you'd be worse off than dead.
You'd be broken.
There are two sides to every story...this is ours.
Warning: Due to strong language, some violence, explicit sexual content, and some dark elements, this book is not intended for readers under the age of 18.
Trigger Warning: This series contains elements of emotional, sexual, and physical cruelty. Any readers with sensitivity to the above topics should proceed with caution, and at their own risk.
The series is a spin-off of the full-length, standalone novel Blame It on the Pain. 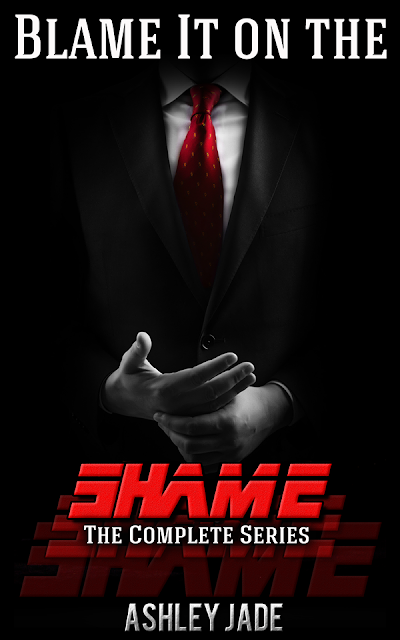 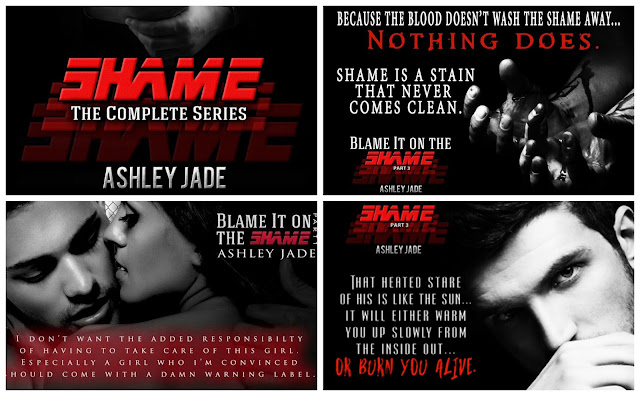 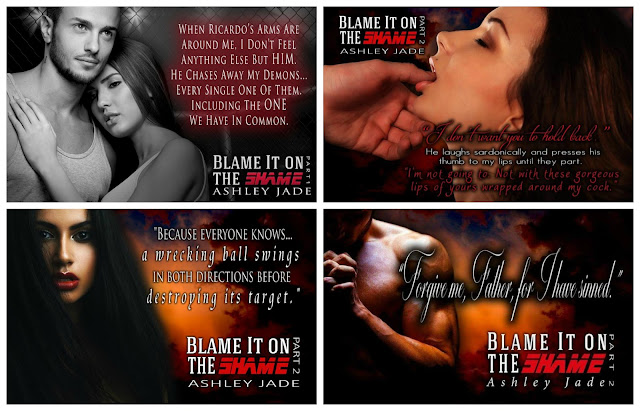 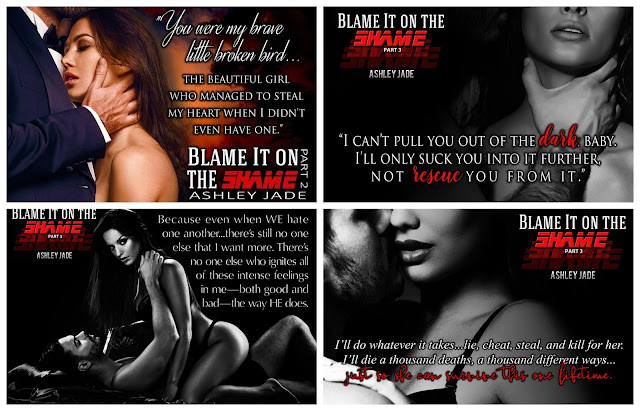 Blame It On the Shame: Part 1

He backs me into the wall. “I'm giving you one chance, Lou-Lou. One chance to tell me what the hell is going on and why you're really here.” My heart thumps against my chest. “Fuck you.” His eyes darken. “Is that your final answer?” “No.” I give him a sugary sweet smile. “My final answer is—fuck you, asshole.” I try and get out from under him but he leans into me causing every cell in my body to ignite. “Leave me alone.” “Not a chance. Tell me why you're going on a date with Tyrone tonight.” I'm so thrown off by the change of subject I'm not sure how to respond. I decide to be blunt. “I don't owe you any explanations.” His jaw tics and he positions his hand beside my head. “You might not owe me any explanations but if you think I'm not telling my father about this you've got another thing coming, sweetie.” I laugh because he thinks he's got one up on me but he couldn't be more wrong. “Go right ahead.” I stare at the bruise forming on his cheek. “Knock yourself out.” The hand beside my head rattles so hard against the wall I jump. “I fucking knew it,” he says gruffly. I crinkle my nose. “You don't know anything.” “I know he's enlisting you to seduce Tyrone and Jackson as a way of getting close to them.” “You don't know what you're talking about,” I say. “Cut the shit. You already showed your cards the second I threatened to call him regarding your infidelity and you didn't piss yourself. That's how I knew you were in on it. Just like I know he's using you to spy on me. The only thing I can't figure out is why.” Shit. Now I really do want to piss myself because if DeLuca finds out that Ricardo knows all this because of me...I'm screwed. I have no choice but to resort to plan b. I stick out my chest and press myself flush against him. My breathing hitches when his eyes lock with mine, daring me to make my next move. I slowly trace my finger along his jaw before running it over his lips. He plants a soft kiss on my finger and I'm transfixed when he parts his mouth and licks the pad of my thumb, inviting me to continue. The electricity between us kicks up another notch and I slip my thumb past his lips. That's when he bites me. It's not hard enough to draw blood but it definitely doesn't tickle. I pull my hand back and flap it around to take the sting out. “That hurt.” His lips hover over my ear. “Consider that your warning. Stay away from my friends. Just go back home to the Hamptons where you can be a little mob princess and live off your sugar daddy.” The sound of my hand slapping his cheek takes both of us by surprise. “I'm not leaving,” I say. He rubs his cheek and his jaw works. “You don't have to because once I tell Tyrone that you belong to DeLuca he won't touch you with a 10-foot pole.” He smirks. “And once I tell DeLuca that you fucked up and let me in on the real reason you're here—I'm sure you'll be long gone.” I smile when the thought hits me. “I think you're forgetting something.” “What's that?” I wrap my arms around his neck and drag my teeth along the shell of his ear before whispering, “You won't have any friends once I tell them you're DeLuca's son and you've done nothing but lie straight to their faces for the past three years.” The look he gives me could kill me right where I stand. I lift my chin and push him off me. “Talk to you later, Ricky.” The look on his face is priceless when I blow him a kiss and slam the door.

Blame It On the Shame: Part 2

I don't know where he is...but I know he's close. I open my eyes and blink rapidly due to the rain coming down much harder now. Tingles erupt on my skin and the air thickens when I look ahead and see the outline of him walking. Only he's not walking toward me, he's walking away from me. He must have just left. When he takes another step, I realize he's not actually walking at all...he's stumbling. He holds his arm out, bracing himself against the alley wall briefly and I continue to watch him. He waits a beat and attempts to walk again, but stumbles...even worse this time. I've never seen Ricardo so out of sorts before. Panic jams in my chest with my next thought. Oh, god. What if he's hurt? What if someone attacked him? And just like that, I'm running as fast as I can to get to him. Since he's less than a block away, I catch up quickly. His back is turned to me but I reach for his arm as he begins to sway. His arm twitches and I can feel the chords of his muscles begin to tighten. Shit, he's going to take a swing. He hates being touched. "It's just me," I say quickly. "Only me." "I know it's you." His voice comes out slurred and gruff. "Are you okay?" He yanks his arm away. "I'm fine. Leave me the fuck alone. I don't need your help." I force myself to ignore the sharp sting of his words before slowly backing away from him. He falls against the alley wall and hangs his head. "Christ, I hate it when Tyrone's right. I'm never drinking again." "Famous last words," I say before I can stop myself. Memories of the day we first met and when he said those very same words to me begin to play through my head like a slideshow... That is until his head snaps up and he shoots me a look so threatening the entire world stops. "Fuck you," he spews.

Blame It On the Shame: Part 3

I take another step forward and peer down at her. “You think I would hurt you?” She glares at me, pure venom in her eyes. “Yes.” I won't let her know how much it kills me that she would think that. How much I hate that she has every right to think that...because it's the truth. Her mouth parts in surprise when I reach down and skim my thumb along her cheek. Before she can protest, I cup her jaw firmly with one hand and trace the delicate line of her neck with my other, pulling her closer. Her pulse races beneath my fingertips as I continue tugging her until she's pressed against me and can't escape my hold. My cock twitches so hard against her tight little body—straining to be inside her again, it's almost painful. She looks up at me with hooded eyes when I shift against her, giving her no choice but to feel me, and I can practically taste both her desire and her surrender right fucking then. I lean down until my lips are ghosting over hers. When her tongue darts out and she licks that lower lip—it takes everything in me not to suck it into my mouth, throw her up against the wall, rip off that trashy outfit she still has on, and take her over and over again in front of everyone...right here, right now. Instead, I tighten my grip on the back of her neck and look into her eyes. “You're right...I would.” I let go of her abruptly and she stumbles back, her expression a combination of shocked and pissed the hell off.

I'm a lover of romance, erotica, dark romance, oxford comma's, the em dash, peanut butter on my cookies and anything thought provoking...except for math. I've always read books growing up and after having a strange dream one night; I decided to just go for it and publish my first series. Little did I know, I would end up falling head over heels in love with writing and it would own and soothe my soul. If I'm not paying off student loan debt, working, or writing a novel—you can usually find me listening to music and pondering the meaning of life. Check my amazon page and Facebook page for future novels. I recently became hip and joined Twitter, so you can find me there, too. I love connecting with my fans—you are my world.