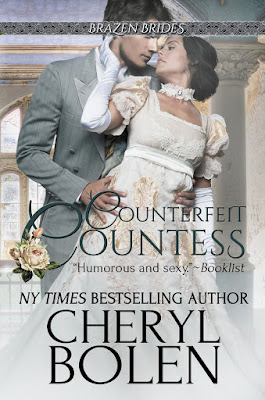 Maggie thought she was married to an earl . . . but it seems that her late and unlamented husband lied to her from the day they met. Now—penniless and stranded in London—she has thrown herself  on the mercy of the real Lord Warwick. What's a counterfeit countess to do?

Edward, the Earl of Warwick, desires only to get rid of the beautiful woman who arrived at his house with no less than fourteen trunks, a younger sister, a maid, and a very large cat. Her preposterous explanation is of no importance—but her late husband held the clue to the identity of England's greatest traitor, a clue the Foreign Service must get at any cost. Edward will have to guard her night and day—but he cannot guard his heart. 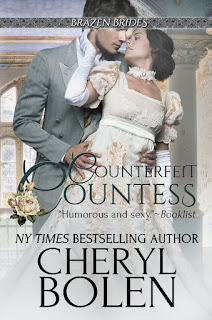 Cheryl Bolen is the New York Times and USA Today best-selling author of over 20 romances, both historical and contemporary mystery. Many of her books have placed in contests, including the Daphne du Maurier (romantic suspense) and have been translated into ten languages. She was Notable New Author in 1999. In 2006 she won the Holt Medallion, Best Historical, and in 2012 she won Best Historical in the International Digital Awards and she's had four other titles place in that competition. Her 2011 Christmas novella was named Best Novella in the Romance Through the Ages. She invites readers to www.CherylBolen.com, or her blog, www.cherylsregencyramblings.wordpress.com or Facebook at https://www.facebook.com/pages/Cheryl-Bolen-Books/146842652076424.