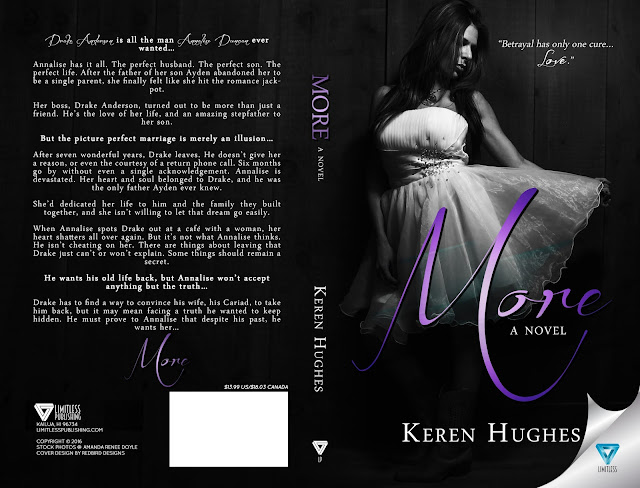 Synopsis:
Drake Anderson is all the man Annalise Duncan ever wanted…

Annalise has it all. The perfect husband. The perfect son. The perfect life. After the father of her son Ayden abandoned her to be a single parent, she finally felt like she hit the romance jackpot. Her boss, Drake Anderson, turned out to be more than just a friend. He’s the love of her life, and an amazing stepfather to her son.

But the picture perfect marriage is merely an illusion…

After seven wonderful years, Drake leaves. He doesn’t give her a reason, or even the courtesy of a return phone call. Six months go by without even a single acknowledgement. Annalise is devastated. Her heart and soul belonged to Drake, and he was the only father Ayden ever knew. She’d dedicated her life to him and the family they built together, and she isn’t willing to let that dream go easily.

When Annalise spots Drake out at a café with a woman, her heart shatters all over again. But it’s not what Annalise thinks. He isn’t cheating on her. There are things about leaving that Drake just can’t or won’t explain. Some things should remain a secret.

He wants his old life back, but Annalise won’t accept anything but the truth…

Drake has to find a way to convince his wife, his Cariad, to take him back, but it may mean facing a truth he wanted to keep hidden. He must prove to Annalise that despite his past, he wants her…