PLAYING WITH FIRE by Niko Mcqueen is LIVE!!!
This is one book you do not want to miss! 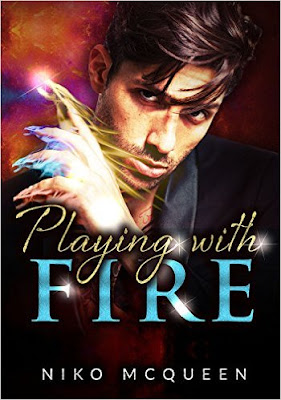 Mikhail is a prince with a deadly secret. The dragons of the past have long since been dead but inside his body lies the first dragon spirit to exist in centuries. There is a catch, he was getting sicker and sicker each day that it was stuck inside his body. If something wasn't done quickly his kingdom may not have a future ruler. Needing a mate in order to set it free, he realized his dreams of love were never going to happen. Resigned to his fate, Mikhail does the only thing he can think of to save himself and his people.


He agrees to the mating games.


One person will win his heart...and his flame.


Riley Cooper is an omega geek with no prospects. His entire life stuck at The Academy had been for nothing and he couldn't wait to age out of the program so he could get a job and live in peace. The last thing he expected was to get an invitation to the Mating Games. When he is tricked into accepting the invitation he thinks his life is over. That is until he lays eyes on Prince Mikhail. For the first time in his life he had something worth fighting for.

“So what’s the prognosis, doc?” Clearing my throat, “It’s getting worse, isn’t it?” Pouring some water into a bowl and handing it to me, “first, can you tell me what set you off in the training room with Leo? I’ve been doing some studying in the archives, and I may have a theory on why it’s progressing so quickly, but like I said, I need that information.” I stared into the bowl on my lap and once again wondered at the doc’s mental state. There was a perfectly good cup sitting next to the pitcher of water. And this is who my father trusts with my life. Shaking my head to clear out those thoughts, I told him what happened leading up to my collapse, leaving out Leo’s apparent interest in him. I had some digging to do later, and I wanted that information. If Leo wanted the demented man, I would do anything I could to make that happen, but first I had to figure out how to slow this thing down before it killed me. “Hmm, well, in my research, it says that carriers of the gene are only activated if a few things happen. One, your fertari must be approaching maturity. So, in essence, they must be at least eighteen, and since this started three years ago, I can guess an age of twenty-one. Second, it is possible, and let me stress how rare this possibility is, that this person may be your fated mate.” If he weren’t so crazy I would think the scrunched up face the doc was making was adorable. “Wait, what? Fated mate? Wow, doc, let’s take a step back. Are you sure that is even a possibility? I mean fated mates haven’t been heard of since before the war.”
Running his hands through is unruly hair, “Honestly, I can’t be one hundred percent certain about any of it. The scrolls were not clear about fated mates, since it was something that was just understood at the time. People lived hundreds of years then, so there was no need to record that information since they assumed, as preternatural creatures, they would be around.” The doctor slumped in the chair and looked totally defeated. It would’ve been the look of any defeated man if the doctor’s feet could touch the floor. It put me in the mindset of Alice in Wonderland. I couldn’t help but chuckle thinking about it. My chuckle turned into a full belly-laugh, until the doctor’s next words set in. “You’re laughing now, but the scrolls were sure about one thing. Once the mark appears, you will have one month to get pregnant, or die.” Suddenly, I couldn’t breathe. Standing up slowly, so as not to faint, I lifted my shirt to show my bare chest. “D-Do you mean this mark?” I whispered. I never knew before that moment that one simple nod would be enough to take my breath away.
About the Author

Niko lives in Savannah GA with her cute as a button little boy. She spends her days attempting to finish college (finally…), take care of her son, and pen the next hot m/m story. She does all of this while trying not to forget that she left the stove on. A lover of all things romance she reads far more than she writes and hopes that you continue to support the genre.