*BLOG TOUR* Keeper of the Gate by Paula Kennedy 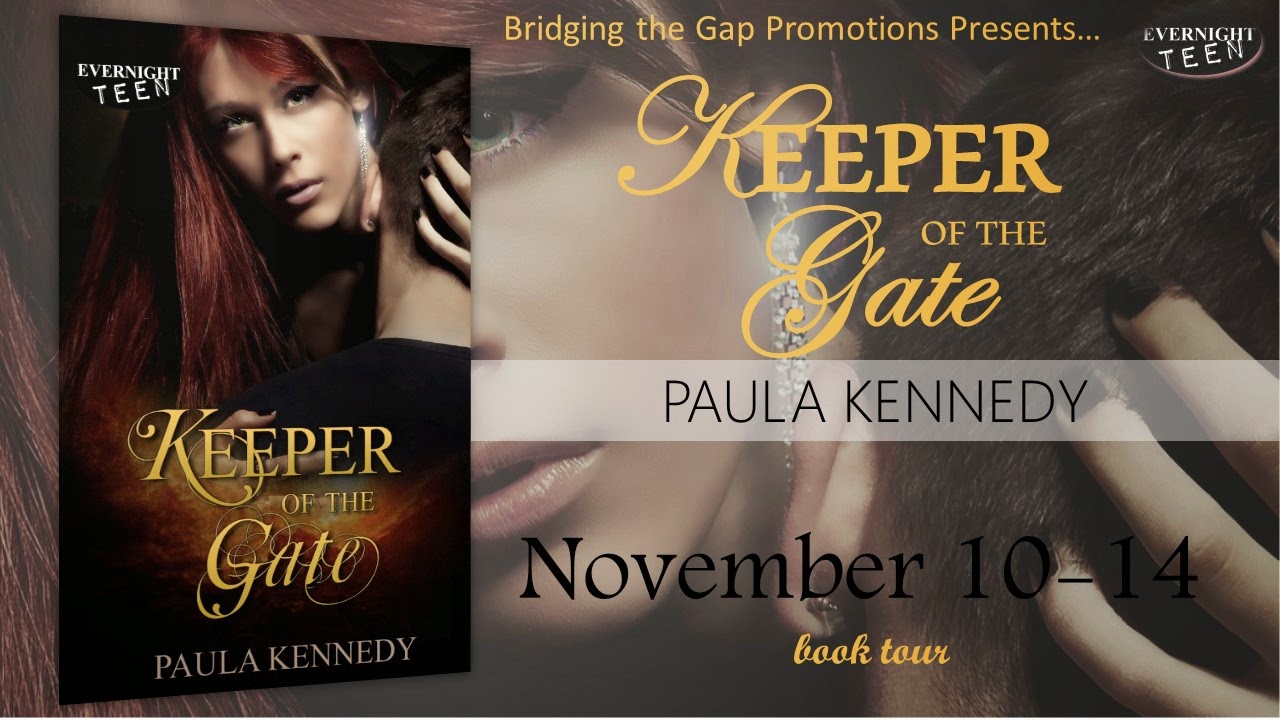 KEEPER of the Gate 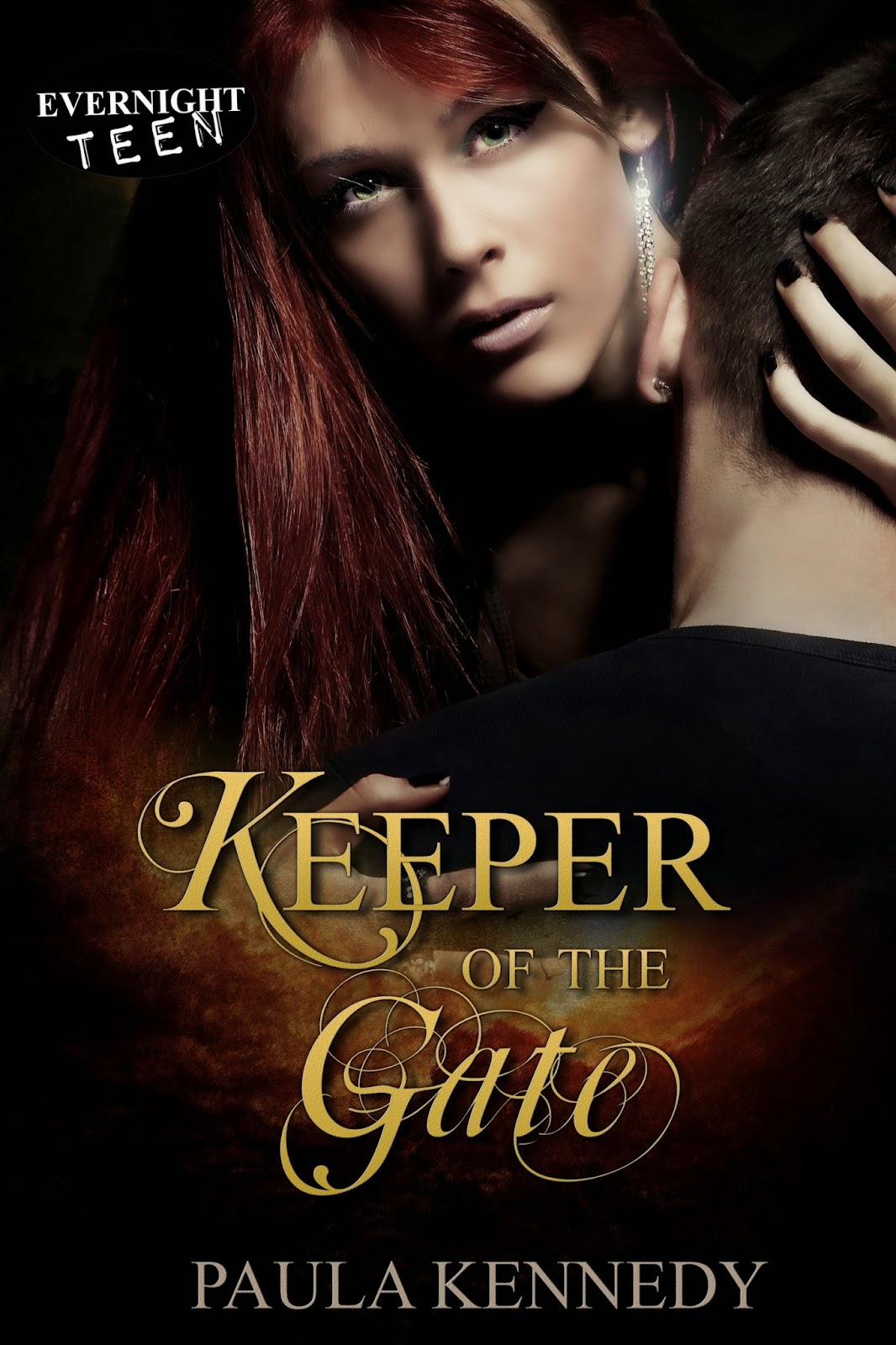 Anna, the girl with flaming red hair and attitude to match, always felt like an outcast. In her final year of high school, when she can’t even connect with the right guy, she meets mysterious bible-loving Devin and feels strangely drawn to him.

There’s more to Devin than good looks and his weird obsession with scripture, and Anna finally understands the emptiness she’s felt her entire life. Join Anna as she searches for answers about her past with Devin, struggles to accept her true identity, and begins an adventure into the City of Fire to reseal the gates of Hell.

Backing away, I turned toward the wall. “Can’t you just leave me alone? All I’m asking for is time to say goodbye to my family. Why is that so hard?”

I could feel the heat of him directly behind me but didn’t turn. “You know the reason.” His tone was quiet and serious. “I am not going to repeat myself.”

“Go away, Devin.” Tears of frustration would not be held at bay any longer and my words were laced with hatred. “Just leave me alone!”

Heat building in my chest suddenly exploded and I turned and shoved him as hard as I could. He staggered backwards a couple steps, but caught himself easily.

“That was pathetic,” he mumbled and moved back over to me.

He laughed at my threat and grabbed for both of my wrists. Arms flailing wildly, I avoided his hands but somehow he flipped me around to pin my body against the wall with his. He slipped his legs between mine and spread them wide.

“Get . . .off . . . me.” I huffed under his weight and struggled to pull away. He only dug his knees into the backs of my legs more forcefully. Laughing, he pressed his torso harder against my back before fumbling to grab my wrists.

“Make me leave, Anna,” he whispered breathlessly into my ear as he forced my hands over my head. His fingers dug into my wrists and this brought tears to my eyes.

“You’re hurting me!” I hissed through clenched teeth and leaned away from his face. “Get off me!”

He grunted with the effort and after a bit of a fight took both of my hands in one of his. With his free hand he took a fistful of my hair and yanked my head back.

“Ow!” I swore and blinked tears down my cheeks.

“You better hurry.” He hissed. “Make me leave before someone gets hurt.”

The heat of his breath in my face fueled the fire in my chest and I screamed in frustration, fear and anger. He laughed gratingly and this only ticked me off more.

“No one can hear you scream. It’s just us.” He pushed my knees painfully into the wall with his legs. “Maybe you like this. Huh?” he asked, pressing his torso harder against me. I cried out as the air was squeezed from my lungs. “I am in complete control, Anna. I could do whatever I pleased with you right now. What are you going to do about it?”

“Why are you doing this to me?” I sobbed and my anger fizzled. My words came out in a great shudder. “Get off. Please.”

“Come on!” Spittle sprayed my cheek when he yelled and I clamped my eyes shut. “You’re not Annalisa Harold.” He yanked my hair again and I whimpered.
“Stop crying,” he demanded and let up his grip a fraction.

I wriggled and struggled to move away but it felt like he was made of iron. I sobbed breathlessly, my muscles spent. His suggestion I was some type of warrior was ridiculous.

Devin’s voice was laced with anger. “He will destroy your family. He will torture your friends. Is that what you want for them?”

I couldn’t breathe, could hardly think of anything but taking a lung full of air. My cheek pressed against the cold drywall and tears dripped like ice down my neck. I wanted to get away from him, wanted to breathe, but sorrow sapped my  strength. Perhaps I should give in to him. Perhaps that was what I needed.

I cried then. Long, mournful sobs racked my trapped chest for what felt like hours. We stayed as we were for so long, in fact, the cold in the drywall started to eat itself into my brain. I pleaded, I begged, I screamed, but Devin refused to release me. His breath was like fire in my ear, his body a prison. He was never going to let me go.

Then the images started to come. I was desperate to save my mother, my
father, my friends. Scene after scene of my life flashed like lightning in a summer storm and I knew I couldn’t sacrifice them. I didn’t care about myself, I wanted to die, but I couldn’t let my family suffer in my place. They were the innocent. They had loved me like their own.

Drawing what breath I could, I screamed from the pit of my stomach and
pushed against the wall with all my might. This last effort created enough space to allow me to turn around. Anger flooded in then and I wanted to kill him. My heart raced, I couldn’t seem to draw enough air, and my body tingled with lightning.

Meeting his eyes, I didn’t miss the look of surprise that swept across his face. Glad I finally had the advantage, I drew a shaking breath before shoving him with as much strength as I could muster. As my fingertips touched his chest, the air came alive with pin pricks of electricity. Amazingly, Devin flew across the room, pulled by some invisible force, and I was left standing alone in shock. His body hit the opposite wall hard enough to knock my clock off the nail, but he
was right back on his feet and hardly fazed at all.

He adjusted his glasses and smoothed his hair. “That was good, but it wasn’t good enough.”

Recklessly, he charged at me again but this time I was ready. I lunged into a forward roll away from him, and got back on my feet, fast enough to send a roundhouse kick toward his head.

He blocked my foot skillfully, but I nearly missed a low kick from him toward my right shin and stopped it at the last second. In a flurry of movement, he threw a series of punches toward my head, all of which I blocked with my forearms. Unfortunately, as I was backing up I tripped over a book bag. He grabbed the front of my shirt as I collapsed backwards and my hair brushed the wall.

“Thanks,” I grunted and wrenched my shirt free of his grip as I jumped
back on my feet.

With every inhalation of air my body came more alive. I was
electrified, invincible, and going to kick Devin’s ass. 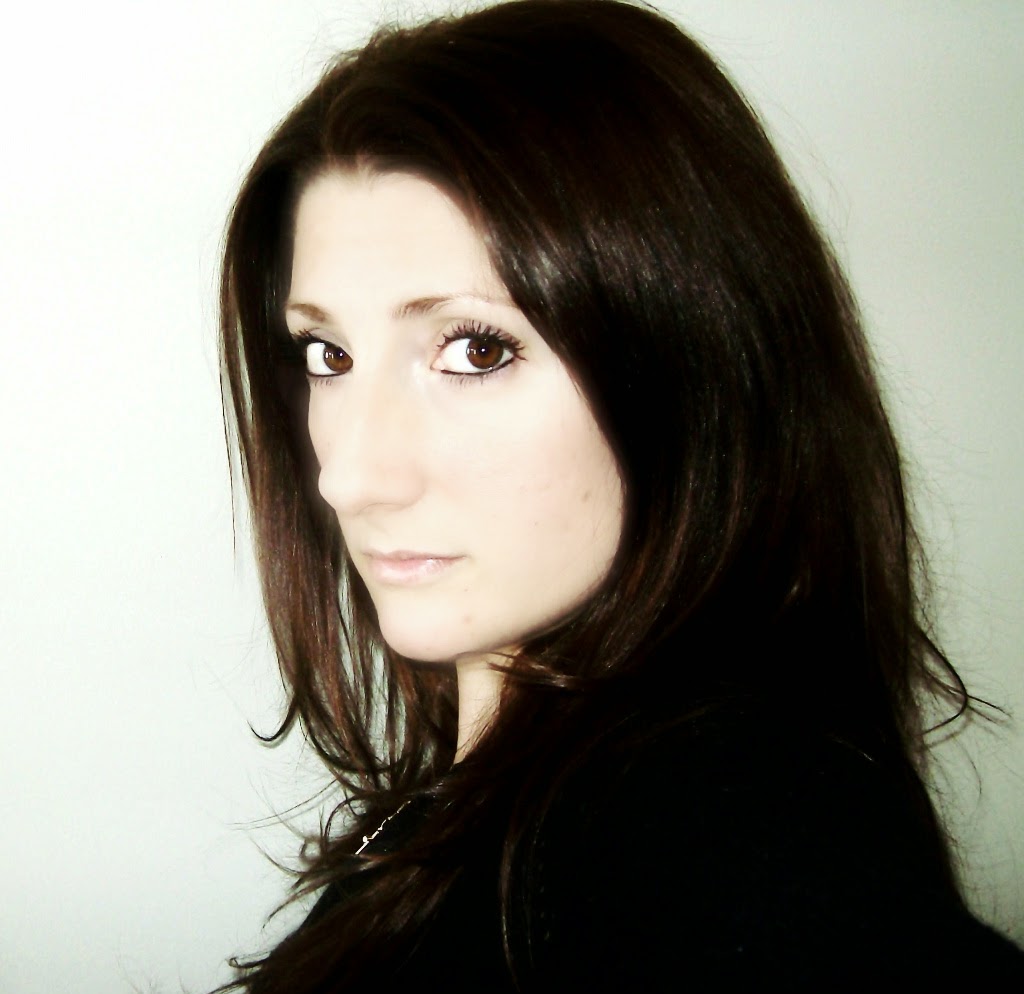 Born and raised in Sault Ste. Marie Ontario, Paula has a B.A. in
psychology, a B. Ed. in the primary, junior, intermediate and senior
divisions, and a vivid imagination. She spent her early years
listening to the stories of her father, a well-loved high school
teacher and creating tales of adventure for her two younger sisters.
She is a wife and mother to four amazing children.
“I am a mother, a wife, a teacher and a writer. Life does not get any
better than this!”

Giveaway:  1 Ebook copy of Keeper of the Gate
- Please leave a comment on this blog to enter,
say “HI” to Paula and tell her what you like to read!!