~*BLOG TOUR*~ A Shop Girl at Sea by Rachel Brimble 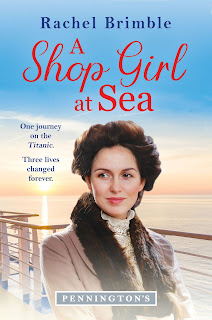 Add to #Goodreads TBR ↓
https://bit.ly/2Kh7jkl
#BuyLinks ↓
Amazon US: https://amzn.to/2VDliGz
Amazon UK: https://amzn.to/2HSZ1OC
Kobo: https://bit.ly/2TcCv8y
Google Play: https://bit.ly/2PrvM9M
iBooks: https://apple.co/2uBz17q
Blurb ↓
Bath, 1912.
Amelia Wakefield loves working at Pennington's, Bath's finest department store. An escape from her traumatic past, it saved her life. So when Miss Pennington sets her a task to set sail on the Titanic and study the department stores of New York, she couldn't be more excited – or determined!
Frustrated with his life at home, Samuel Murphy longs for a few weeks of freedom and adventure. Meeting Amelia on board the Titanic, Samuel can't help wonder what painful history has made the beauty so reserved. But he already has too many responsibilities for love.
Ruby Taylor has always kept her Pennington co-workers at a distance. Making sure her little brother is safe has always been her priority. But when that means accepting Victoria Lark's offer of sanctuary, more than one of Ruby's secrets is under threat of being revealed...

A riveting and uplifting saga, perfect for fans of Elaine Everest and Fiona Ford. 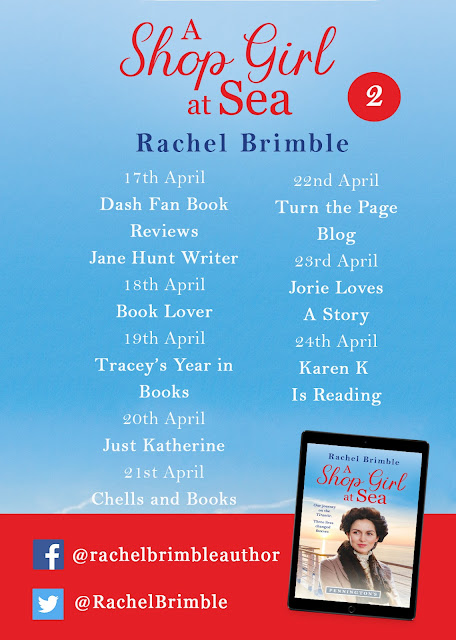 EXTRACT ↓
No matter how hard he tried to be a better son and brother, the depth of Samuel Murphy’s continual claustrophobia grew ever more suffocating. But now, he smiled, relishing that he would soon be away from his family’s endless demands. In less than a month, he’d be free.
Even if only for a while.
The fact he wished himself absent from home didn’t sit well in his heart or his conscience, but the clamour and proximity meant his mother’s small terrace house resembled a prison rather than a home. Being solely financially and emotionally responsible for his mother’s and sisters’ welfare for over a decade had taken its toll, and now Samuel couldn’t wait to be away.
Pushing himself out of his armchair, his smile dissolved as another argument between the women in his family erupted. He carefully placed his folded newspaper on the arm of the chair. ‘If you can’t stop bickering, then for God’s sake take it out into the yard. My bloody head is splitting from the noise of you.’
His mother and two younger sisters stopped mid-quarrel. Their identical, bright blue eyes turned on him and Samuel crossed his arms, staring them down.
‘Shut your mouth, Sam. We don’t have to listen to you.’
‘Because you’re the only man in the house, that doesn’t make you the man of the house.’
‘Be quiet, the pair of you, and do as our Sam says.’ His mother glared at her daughters, fingers splayed on ample hips. ‘Go on. Outside.’
Samuel watched his sisters leave the room, still muttering and poking one another. ‘Those two need to find some work while I’m away.’ He faced his mother. ‘Neither of them has kept a job for more than five minutes. I swear to God they purposely sabotage every opportunity they’re given. There’s plenty of work around if they would just show will—’
‘They should be married, not working.’ His mother’s face was etched with tiredness as she walked to the small circular dining table in the corner of the room and began clearing away their dinner plates, remnants of cheese and breadcrumbs scattering the tablecloth. ‘Never in my wildest dreams did I think I’d still have the pair of them unmarried and living under my roof at the age of twenty-three and twenty-one.’
Samuel swiped his hand over his face as he battled with how to break it to his mother that the reason neither Katherine nor Fiona were married might have a lot to do with how much she coddled her precious daughters. No man in Bath was good enough for them. Everything – from housework to shop work – was too demanding or demeaning.
After all, Samuel was there to look after them. It was his job to see them right.
He lifted the teapot from the table, snatched up a couple of napkins. ‘Something has to change, Ma. I’m twenty-seven years old and wouldn’t mind a life of my own. This job on the Titanic could be the start of something new for me. Something…’
His mother slowly lowered the plates to the table and turned, her eyes brimming with tears. ‘Your job is to continue what your father would’ve done had he been here. How can you expect me and your sisters to do all that a man can? God knows, I wish I had a husband to look after us, but I don’t. We are women, Sam. We’re not designed for bringing in money and necessities. That’s your job.’ Her cheeks reddened. ‘Your place is here, with us. You will go on that ship, earn your money and come home. These fantasies of a better life are just that. Life is hard and it’s cruel.’ She lifted the plates. ‘And more fool you if you think differently.’
He fought the weakening in his heart. ‘You think so, do you?’
Author Bio ↓ 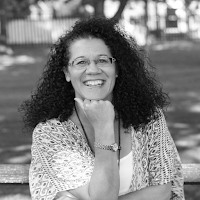 Rachel Brimble lives in Wiltshire with her husband of twenty years, two teenage daughters and her beloved chocolate Labrador, Tyler. Multi-published in the US, she is thrilled to have a new beginning writing for Aria in the UK. When Rachel isn’t writing, she enjoys reading across the genres, knitting and walking the English countryside with her family…often stopping off at a country pub for lunch and a chilled glass of Sauvignon Blanc.
Author Links ↓
Twitter: @RachelBrimble
Facebook: @RachelBrimble
FOLLOW ARIA ↓
Website: www.ariafiction.com
Twitter: @aria_fiction
Facebook: @ariafiction