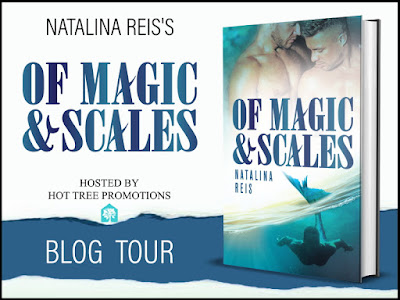 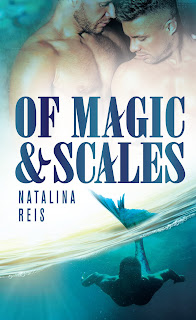 With a serial killer on the loose, the baffling mystery of Aiden’s past, and their tenuous budding romance, Aiden and Fouchard tread through a world of magic and myth on padded shoes, terrified to stir up something neither can control or defeat.

Aiden Mercer’s life now centers around lounging on the sunny beaches of his adopted country with a beer in one hand and a coffee in the other while admiring the local male population. After a rough life as a respected detective in DC, playing it cool shouldn’t be too hard, right? With the magical community on his case and dead bodies piling up around town, the responsibility of finding their killer seems fated to fall on him and deny him of his easy living.

Cantankerous merman Naël Fouchard's life is focused on bringing up and protecting his little sister. When DNA found at the scene of the murders mark him as the prime suspect, Naël seeks out the help of Aiden, whose reputation as a detective grossly belies his lazy lifestyle and apparent lack of ambition.

The chemistry between the strong, stoic Naël and the easygoing Aiden is undeniable, no matter how many walls Aiden builds.

If this unlikely pair can’t come to terms with their feelings for each other long enough to catch the killer, their emotional turmoil might yet allow the murderer to kill them instead.

Fouchard was sitting behind the wheel of a black Jeep, a thin dark T-shirt stretched across his muscled chest. Heat ran to all my extremities as I glimpsed the promise of his body underneath those clothes. Hell, he was fucking sexy.
“Are you coming in or are you going to stare at me for the rest of the night?” More heat climbed up my neck into my face. I hopped in and closed the door. He wasn’t wearing a coat and smelled of ocean breeze and warm nights. “Buckle up.”
We drove in silence for a while, crazy thoughts rushing through my mind. What if he was the murderer after all and this was nothing but a ruse to corner me somewhere alone and kill me? I knew better than to trust magicals, but Fouchard confused all my senses. I knew merrows were an insular species who stayed with their own most of the time. The fact that he had sought me out was telling—of what, I was not sure.
I knew I should keep my mouth shut and be on the alert just in case. But then again, I wasn’t that wise. “Are you planning on murdering me somewhere?”
After a moment of stunned surprise, Fouchard barked out a laugh. “Mr. Mercer, you followed the wrong career. You should have been a comedian.”
“Glad to know I amuse you, Mr. Fouchard.” I was annoyed. At myself mostly. Why was I so bad at following my own advice?
He fell silent, his eyes intent on the dark road ahead. “Oh, you do so much more than just amuse me, Aiden,” he said, a ring of something I couldn’t identify in his voice. Longing? Then again, it could have been a veiled threat. What did I know about sexy merrows anyway? “So much more.” 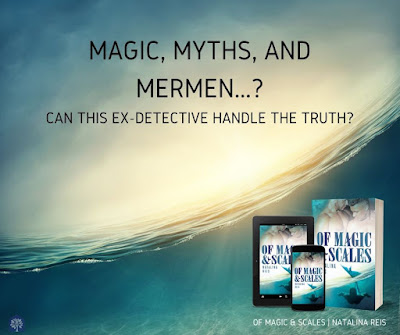 Author of We Will Always Have the Closet, Desert Jewel, and Loved You Always, Natalina wrote her first romance in collaboration with her best friend at the age of 13. Since then she has ventured into other genres, but romance is first and foremost in almost everything she writes.

After earning a degree in tourism and foreign languages, she worked as a tourist guide in her native Portugal for a short time before moving to the United States. She li

ved in three continents and a few islands, and her knack for languages and linguistics led her to a master’s degree in education. She lives in Virginia where she has taught English as a Second Language to elementary school children for more years than she cares to admit.

Natalina doesn’t believe you can have too many books or too much coffee. Art and dance make her happy and she is pretty sure she could survive on lobster and bananas alone. When she is not writing or stressing over lesson plans, she shares her life with her husband and two adult sons.