~*BLOG TOUR*~ The Beach at Doonshean by Penny Feeny 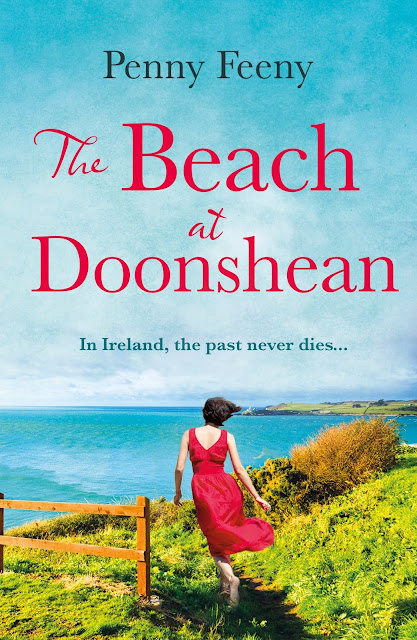 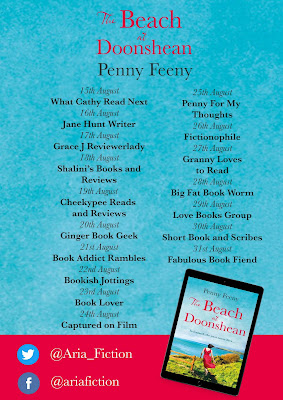 Blurb ↓
In Ireland, the past never dies...
Long ago, on a windswept Irish beach, a young father died saving the life of another man's child.
Thirty years later, his widow, Julia, decides to return to this wild corner of Ireland to lay the past to rest. Her journey sparks others: her daughter Bel, an artist, joins her mother in Ireland, while son Matt and daughter-in-law Rachel, at home in Liverpool, embark on some soul-searching of their own.
As the threads of past and present intertwine, Julia's family confront long-buried feelings of guilt, anger, fear and desire.
Only then can they allow the crashing waves of the beach at Doonshean to bond them together once again.
This is a grown-up, thoughtful family drama for fans of Maeve Binchy and Patricia Scanlan

EXTRACT ↓
2
The Alarm
Matt’s spirits rose as he approached his home. His spirits always rose at the prospect of his wife – not only at the sight of her lithe limbs, the feel of her silky hair, but at the scents she carried with her too. These ranged from the sharp pungency of garlic and rosemary to a pleasant wafting (like today) of vanilla sugar and hazelnut. It was as if she glided around in a personal fragrance factory. In a matter of weeks she had transformed the kitchen that he’d only ever known as a perfunctory fuelling stop.
When he was growing up, food was never foremost in anyone’s mind but his own. There was no pleasure in raiding fridge or pantry to be met with frozen pizzas and bland packs of yogurt. Pocket money went on chocolate bars and chips after school but, by God, he’d spent most of his adolescence hungry. Not now. Rachael’s shelves were full of unusual pickles and elaborate pies; there’d be gravadlax curing in the fridge, stock simmering on the stove. Most of these treats were labelled and spoken for, but to come home to view the feast and sample a few leftovers could put a gloss on the most frustrating of days.
He shrugged off his jacket as he mounted the steps to the front door. His stomach growled a little in anticipation. It came as a surprise to find Rachael’s demeanour didn’t match the vision of milk and honey he’d conjured up. She was in the sitting room, hovering in front of the six o’clock news as if expecting a fearful announcement. He dropped his briefcase beside the oak bureau his mother had left behind. The television screen was filled with a fleet of planes lined up on airport tarmac. He leaned his arm across Rachael’s shoulder and kissed her cheek. ‘Crazy isn’t it,’ he observed. ‘Half the world grounded in this day and age.’
‘They’re changing the guidelines,’ she said ‘They’re going to let the airlines fly after all. They’ve decided the ash isn’t as much of a threat as they thought.’
‘They’re losing too much money, that’s why.’ He patted her arm. ‘Is Danny in his room? I’ll go and find him. Can I smell custard?’
‘No, meringues. Listen, Matt…’
‘What?’
‘No, you go and change. I’ll tell you later.’
‘Rach, what is it?’
Her head swayed and she chewed her bottom lip. ‘The police were here, looking for you. I’m sorry, I was trying not to tell you till after you’d set yourself up with a drink. It’s about your mother.’
‘My mother!’ He nearly said: what’s he done this time? Julia had spent much of Matt’s youth rescuing his stepfather, Leo, from irate publicans, taxi drivers and – more than once – a police station. But she wasn’t married to Leo any more. ‘Why?’
‘She seems to have vanished.’
‘Vanished!’
‘Stop repeating everything I say, Matt.’
‘But you’re talking bollocks,’ he protested. ‘She’s on holiday in France.’
Rachael, much as he loved her, had a disconcerting ability to freeze into an ice maiden. One moment she’d be warm and luscious as a ripe melon and the next an invisible sheet would solidify between them and she’d cast him one of her noli me tangere looks. She did this now and his homecoming fantasy of a welcoming kiss and a delicious snack evaporated.
‘Don’t you realise this is serious? The police turned up HERE. They were waiting for me and Danny. I thought something had happened to YOU.’
‘What did they say?’
‘They’d been contacted by the French authorities because her hire car had been found abandoned. That’s true of lots of other cars too but mostly the drivers have been traced. And that’s the odd thing about Julia. She’s not at the Culshaws and her phone’s switched off.’
‘Have you rung the flat?’
‘I left a message on the answering machine. Even if the builders were there, I don’t suppose they’d know anything.’
‘She’s probably just lost in the travel chaos, people rerouting their journeys and trying to get on ferries and so on. What does Bel reckon?’
‘I haven’t told her yet.’
He’d been loosening his tie. His hand curled around the knot and tugged it. ‘Why ever not?’
‘Because she wouldn’t know what to do. You will.’
Author Bio ↓ 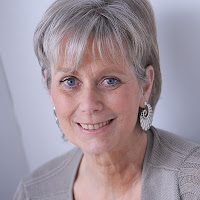 Penny Feeny has lived and worked in Cambridge, London and Rome. Since settling in Liverpool many years ago she has been an arts administrator, editor, radio presenter, advice worker, and has brought up five children. Her short fiction has been widely published and broadcast and won several awards. Her first novel, That Summer in Ischia, was one of the summer of 2011's best selling titles.
Follow Aria ↓
Website: www.ariafiction.com
Twitter: @aria_fiction
Facebook: @ariafiction