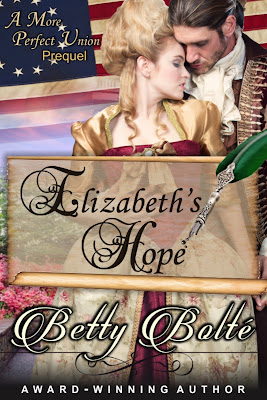 CAUGHT BETWEEN DUTY AND LOVE

Joining the revolutionary army was the honorable thing to do—but Jedediah Thomson hadn’t realized how long he’d be away from the lovely, spirited Miss Elizabeth Sullivan. They’d only begun their courtship when the occupation of Charles Town, South Carolina, trapped her in the city, making it dangerous to get to her.

Elizabeth Sullivan feared for her brothers, fighting for American freedom; for her father, pretending to be a loyalist; for family and friends, caught between beliefs; and most of all for Jedediah, the man she loves, who was doing his duty. She cherished every moment they had together, knowing how swiftly it could be taken away.

And that made her willing to risk everything to claim a piece of him forever…. 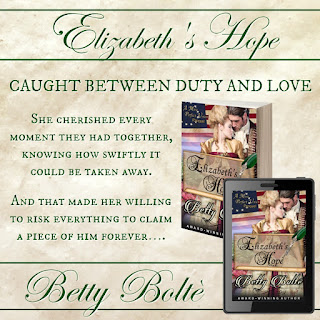 Emily Sullivan’s greatest fear is dying in childbirth, as did her twin sister and their mother. Then she’s thrown in a loyalist prison for her privateering father’s raids on the British, and her accuser--a former beau--promises to recant if she will marry him.

Frank Thomson always loved Emily despite her refusal to return his affections. A patriot spy posing as a loyalist officer, when Frank learns of Emily’s plight, he challenges her accuser to a duel.

Freed from prison, Emily ponders returning the affections of her rescuer--the only man she's ever loved and who married her twin to save the Sullivan family's reputation. But Frank cannot afford to be discovered. For the sake of young America, he must deliver his secrets.

Without a goodbye, Amy Abernathy's childhood sweetheart, Benjamin Hanson, leaves to fight in the American War for Independence. Amy chooses to pick up the pieces of her heart and leave Charles Town to help her sister who is with child.

Benjamin knows he hurt Amy, but he plans to make it up to her after his mission is completed. Then he learns that Amy has been captured by renegade soldiers. Now Benjamin faces his own choice: free the sassy yet obstinate woman he's never stopped loving or protect Charles Town from vengeful British occupation.

In 1782, the fight for independence becomes personal in the port city Charles Towne, South Carolina. Samantha McAlester, midwife and healer, returns to Charlestown to find it occupied by the British and her one of few medically trained people in town. But when a friend is shot during an attack, she must defend her reputation as well as her heart against the town doctor, Trent Cunningham.

Dr. Trent Cunningham has a lot to prove to his father and to himself before he’ll be accepted as the new doctor in town. Having just returned to South Carolina, he’s ready to roll up his sleeves and start showing everyone the results of the education he’s received at university. When the raven haired healer flashes him a professional challenge with emerald eyes, can he prove he’s the best doctor in town without undermining her reputation and her regard for him?

Widow Evelyn Hamilton must overcome societal expectations as well as soaring post-war inflation in order to provide for herself and her infant son. Determined to rebuild the gutted manor as well as her life, she vows to create a safe home on her own rather than be subjected to the dictates and demands of another husband.

Militiaman Nathaniel Williams is driven by a thirst for adventure and longs to make his fortune on the frontier. When he visits Charlestown and his heart becomes ensnared by a smart, beautiful widow--who would never consider leaving her family behind--he must make the hardest decision of his life.

Can Nathaniel fulfill his dream even though it would mean living without Evelyn? 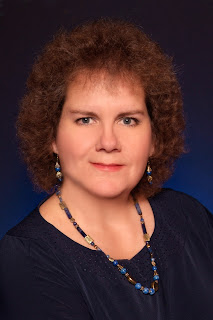 Betty Bolté writes both historical and contemporary stories featuring strong, loving women and brave, compassionate men. No matter whether the stories are set in the past or the present, she loves to include a touch of the paranormal. In addition to her romantic fiction, she’s the author of several nonfiction books and earned a Master of Arts in English in 2008. She is a member of Romance Writers of America, the Historical Novel Society, the Women’s Fiction Writers Association, and the Authors Guild. Get to know her at www.bettybolte.com.